Augmented Reality (AR) is “the future of the universe,” according to Shelly Palmer, chief executive officer of strategic advisory firm The Palmer Group. Toward that end, Business News Daily declared 2018 as the year AR hype would become actual reality.

Indeed, it’s showing signs of living up to both predictions, as more and more businesses are embracing, or at least observing, the technology and the ways it can be used to improve employee and customer experiences.

After some forays into Virtual Reality (VR), Dell EMC, for example, forged a partnership with AR headset manufacturer Meta in January to become the first authorized reseller of the Meta 2 Augmented Reality Development Kit.

Adobe believes AR could be “bigger than the web,” according to Chief Product Officer Scott Belsky. That’s why the company is working on Project Aero, a tool designers and developers can use to create immersive AR experiences.

Microsoft released HoloLens, an AR headset that brings virtual images and information into your line of sight, allowing you to interact with both the physical and virtual worlds simultaneously. The company is working on the second iteration, scheduled to debut in 2019.

And these are only a few of the augmented reality developments taking place thus far.

IDC forecasts global spending on AR and VR combined will grow from $11.4 billion in 2017 to $215 billion in 2021. That’s a compound annual growth rate of 113.2%. And while VR headsets are leading today, AR headsets are expected to surpass VR versions in 2019.

London-based mergers and acquisitions advisory Hampleton Partners breaks out augmented reality on its own, projecting the AR market to grow from $4 billion in 2016 to $161 billion in 2020. That’s an increase of $157 billion in just four years.

What is augmented reality?

Before we can fully grasp how AR can improve business practices, we need to understand what it is — and what it isn’t. So let’s define the terms:

“The differentiation” of MR “is that it combines perception of the physical space around the user with a virtual 3D space,” explains Jason Ioffe, a software architect of emerging technologies for Insight’s Digital Innovation team.

“This is in contrast to virtual reality, which completely obscures and replaces a user’s perception of the physical world,” he adds. “Furthermore, it differs from common augmented reality in that virtual objects interact with real, physical space rather than simply being overlaid like a heads-up display.”

All three of these technologies are already being used in business settings and are making a difference in the employee experience, as well as the customer experience. But AR lends itself most to widespread business use.

“We believe that combining the capabilities of machines with humans’ distinctive strengths will lead to far greater productivity and more value creation than either could generate alone,” reports a Harvard Business Review (HBR) guide.

Improved productivity is one of the biggest advantages of embracing AR. But how does the technology foster that? By overlaying reference information directly in an employee’s view, AR empowers workers with the information they need exactly when they need it.

This capability lends itself well to training applications, which can help workers quickly develop skills they’re lacking for certain jobs (more on that later).

The real advantage comes from wearable AR technology rather than using it on devices. “By wearing the AR technology instead of using it on a smartphone or tablet, workers can get the information they need at the exact moment they need it,” according to a Society for Human Resource Management (SHRM) article. “If they leave their workspace to find a part, for example, AR goes along to help identify the correct piece.”

A Harvard Business Review article concurs. “Wearable augmented reality devices are especially powerful, as they deliver the right information at the right moment and in the ideal format, directly in workers’ line of sight, while leaving workers’ hands free so they can work without interruption.” In doing so, wearable AR shortens the time it takes to complete

A Wakefield Research survey of 1,023 respondents assessed the greatest reasons to embrace AR glasses over smartphones or tablets, as shown in Figure 1. The top incentives were freedom from having to look down (36%), following instructions hands-free (36%) and multitasking more easily and efficiently (34%).

The business benefits of AR are especially helpful in the areas of training and collaboration. AR provides a safe environment for employees to work in simulation and learn from their mistakes. They can train at their own pace in a style that works for them.

“One of the reasons why AR is so successful when it comes to training is that we all learn in different ways. AR engages us by the senses and provides an alternative to learning by rote or being bored to death by PowerPoint,” reports a CIO article.

The HBR guide further explains, “AR allows instruction to be tailored to a particular worker’s experience or to reflect the prevalence of particular errors. For example, if someone repeatedly makes the same kind of mistake, he can be required to use AR support until his work quality improves.”

AR can also rapidly equip workers who have little or no formal training to do high-skilled jobs. “In some companies, AR has reduced the training time for new employees in certain kinds of work to nearly zero and lowered the skill requirements for new hires,” according to the HBR guide. In a competitive job market, this can be a significant plus.

In addition, AR saves time and money in travel and equipment, especially when it comes to connecting remote workers. “The experience in augmented reality can be shared,” says Insight’s Ioffe. “This means that each teammate can view the same augmented or mixed reality experience. Visuals and data can also be relayed to remote teammates using desktops or smartphones.”

By improving what can be seen, heard and shared among workers, AR enhances collaboration, as well as decision-making. “AR can also help break down communication barriers between business and industrial teams operating in different parts of the world,” points out a GE Reports article.

One way some AR solutions can do so is by easily translating language in real time so that it can be clearly understood in each person’s line of sight.

“AR-enabled devices can also transmit what an on-site user is seeing to a remote expert, who can respond with immediate guidance,” adds the HBR guide. “In effect, this instantly puts the expert at the user’s side, regardless of location.”

Preparing for the AR revolution

Before augmented reality can become commonplace in businesses, some barriers need to be overcome. Usability and employee reluctance need to be addressed. Head-mounted AR displays are still in their infancy and will take time to mature.

The biggest complaint with HoloLens, for example, is its limited field of view — only 30 degrees. “While this is sufficient to work with, it can take you out of the experience as objects tend to look clipped,” Ioffe explains.

Another obstacle is the expense of AR headsets. Smartphones and tablets have AR capabilities, but freeing workers’ hands has definite advantages. When looking at the cost of devices, think long term. By saving money on travel and accommodations and training workers faster, AR devices could have a high return on investment.

“Anytime there can be value in adding data or experiences dependent on the context of the physical space, there is value for AR,” Ioffe says.

Now is the time to start thinking about the potential impact of AR on your customer experience and employee performance. It’s much more than just another communication channel, asserts the HBR guide.

“It is a fundamentally new means of engaging with people. Just consider the novel way it helps people absorb and act on information and instructions.” Like Adobe, HBR expects this technology to be just as disruptive as the web was. It’s here to stay.

A Wired article sums, “It’s going to take a while, but augmented reality will completely reshape the way we work. Even the first phase — simply layering digital information and objects over the real world — will enable you to do your job faster and more efficiently.”

Hang on. It’s going to be a wild ride.

Empower your employees.We’ll help you turn your ideas into meaningful business outcomes — quickly and smoothly. 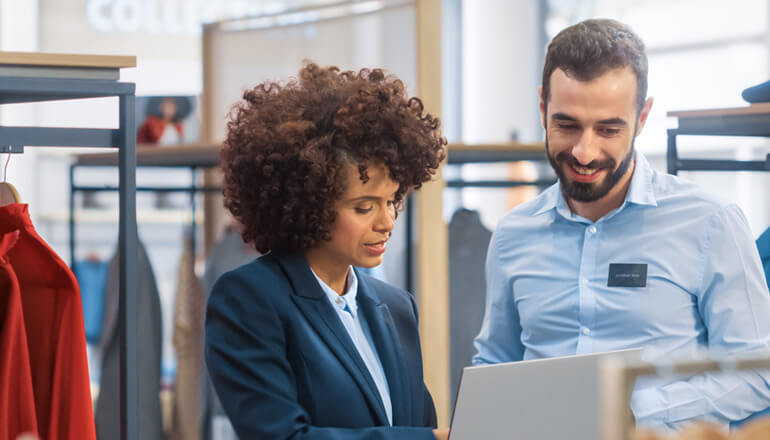 Article How Automation is Transforming the Retail Experience 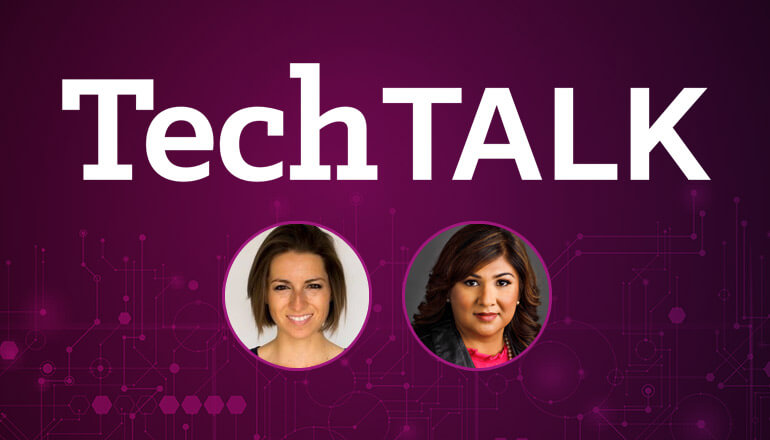 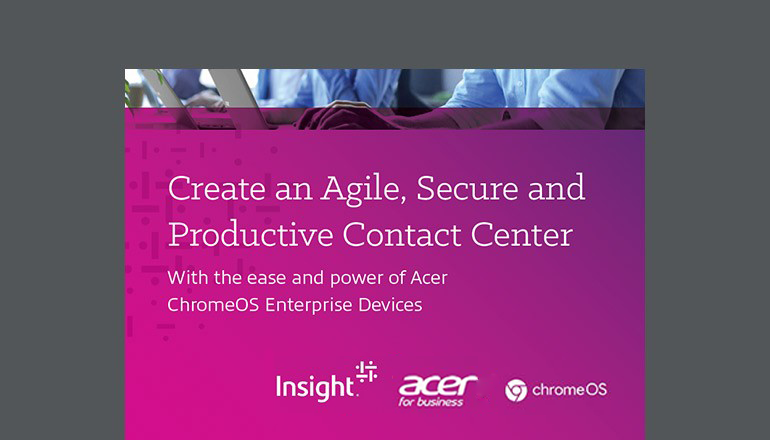 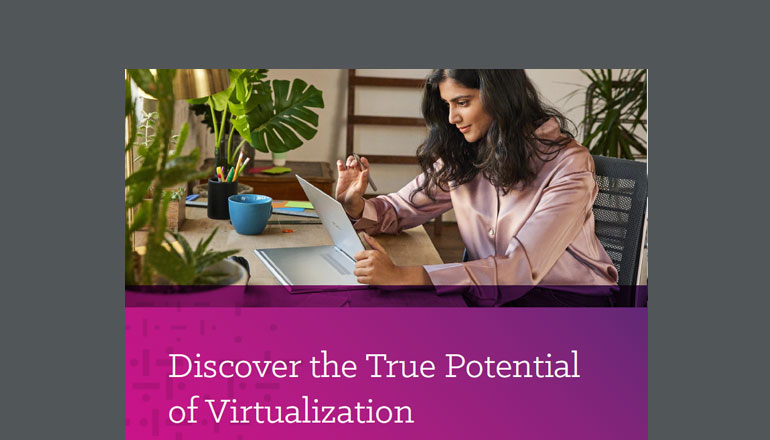 TechTalk One Solution to Keep Your Apple Users Productive and Secure