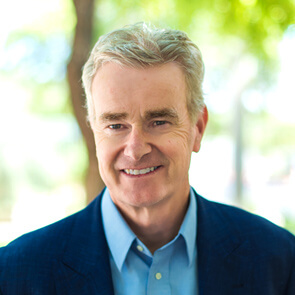 “Information technology is the best industry in the world, transforming and disrupting many other industries for the better. This disruption is increasing in speed and creating significant opportunities that impact how we live, create and do business.”

Get to know Ken.

Ken Lamneck doesn’t believe in settling for the present. He is fascinated with the future and technology, and the way each inspires the other. This interest and vision have driven Ken from the West Point Military Academy to Insight, where he leads the company as chief executive officer.

After five years in the U.S. Army, Ken began his civilian career as an IBM engineer. But he found that sales and marketing better suited his competitive spirit and the servant leadership principles he learned while in uniform.

Ken honed his technical knowledge and people skills while rising through the ranks at Arrow Electronics. As president of Arrow’s Industrial Computer Products business, he was drawn to the rapid pace of innovation in the emerging IT industry. He moved to Tech Data Corp., where he directed its growth and operations across the United States, Canada and Latin America.

In 2010, Ken joined Insight. His approachable, hands-on leadership style can be seen in Insight’s corridors every day, as he motivates teammates and aligns their efforts with Insight's strategy to help clients manage their business today and transform for the future.

Gain knowledge from our leadership.

Insight executives and industry thought leaders share their perspectives on IT and the industry in our Insight Voices blog and our TechTalk podcast.