You may be familiar with edge computing’s benefits. But a deeper look reveals the brass tacks of actually thriving at the edge every day — and the right server makes a big difference. Here’s how.

Imagine this: The initial, exciting buzz of edge computing has died down. The use cases are straightforward. The need to adapt is a no-brainer.

Now, IT needs to take a long, hard look at their technology stack.

There are many infrastructure components that work together to help you run effectively at the edge. But if there’s one thing every enterprise has running in the background, it’s an assembly of servers.

So, how do you make the switch from traditional, aging servers to servers that actually help you realize the benefits of edge computing?

As Chief Technology Strategist at Dell Technologies, I see five must-have components of edge servers that will help speed innovation and make IT teams happier and more productive.

Edge locations often lack the space to support servers with traditional form factors. Think of retail giant Target with its 2,000+ store locations — each one “a mini data center” according to CEO Mike McNamara during a presentation at the 2021 Infra Cloud Conference (ICCON) held earlier this April. Without the typical constraints of bulky physical hardware, Target’s sleek Point-of-Sale (POS) systems have been able to keep up with growing data at the edge.

Burning questions: This infographic answers seven common questions about edge computing — from its basic definition to use cases and more.

For rugged environments like in-field oil and gas exploration or factory floors, a server must be able to withstand harsh conditions and extreme temperatures. Features like built-in shock resistance keep the server operational in high-stakes scenarios like military combat, while filtered bezels prevent dust build-up in rugged construction sites.

3.    Edge servers can be remotely managed.

Edge computing helps businesses process data faster than ever. And there’s no other way to process that data efficiently if your servers and key services can’t be deployed and provisioned remotely. Remote management lets a core data center handle any situation that might arise, and is ideal for situations where IT staff isn’t close to the edge location.

Through the eyes of a CEO: Insight’s own CEO Ken Lamneck reflects on how edge computing will shape the future in this eye-opening Tech Journal article.

The cloud computing explosion in 2020 meant that more data than ever before was pushed outside of the traditional data center — forcing security IT pros to rethink their technology and processes. Servers should be built for real-time responses and streaming telemetry that provides continuous monitoring of edge devices. Because in a world where hackers are getting smarter, your servers should be getting smarter, too.

Fast and efficient is the ultimate goal for IT, but especially outside of the data center, there’s a critical need for superior performance. As the number of real-time applications grows, servers must be built to process storage and memory at the speed of the edge, which will reduce data latency. Look for high-speed GPUs that maximize throughput and scalability.

At the end of the day, an edge server must serve one purpose: to overcome the constraints that the distributed edge has placed on your infrastructure.

From environmental to bandwidth limitations, I urge you to see these challenges as an opportunity — a chance to weed out the parts of your technology stack that aren’t helping you speed innovation. If your infrastructure is aging and you’re ready to make moves to increase your competitive edge, your servers are an excellent place to start.

Keep business in the fast lane. Together with Dell Technologies, Insight helps you build and sustain a modern data center.

Allen is an IT technical executive with more than 30 years of experience in enterprise architecture design and consulting, IT professional sales and executive leadership. He currently drives Dell Technologies’s PowerEdge portfolio through a data-centric workload and solutions practice, helping partners build unique solutions to deliver clients a faster time to value and significant business results. 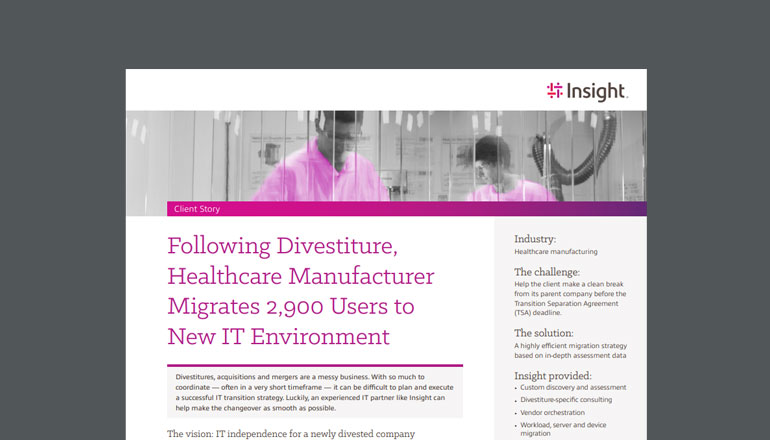